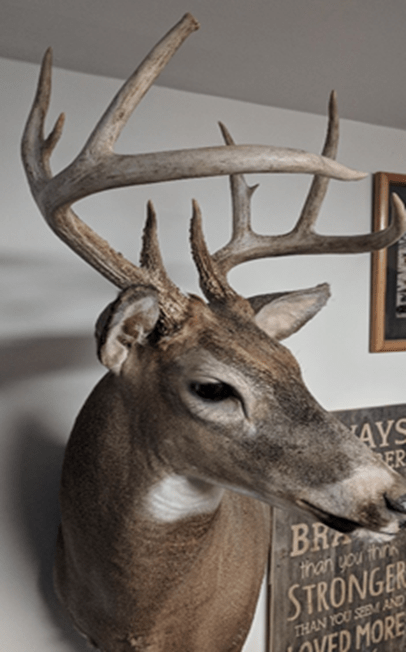 The 2002 bow hunting season in Connecticut was quickly approaching.  The weather was cooling and as my dad always used to say, I can smell fall in the air”. Yes fall was in the air and it was the very beginning of September.  The bow hunting season would start Sept 15th.  I had planned on bow hunting a small 100 acre parcel of private property that acted as a refuge for some bucks in the suburban area of Stamford, CT.

I had just completed my mock scrape set by clearing out a large round area of the ground. Taking great care to use a stick to clear out all leaves, wearing rubber gloves of course to reduce my scent, revealing the bare dark brown dirt. I had put some dominant buck lure into the mock scrape, as this is the time to get those local bucks thinking that some other guy was in the area looking to take their ladies from them.

I had also tie wrapped a cut branch to the tree just adjacent to the scrape dirt circle.  Just high enough for a buck to get his orbital gland a good working over into the tips of that branch.

I was set. The scrape was made and the licking branch was in place.  I wouldn’t come back until Sept 15th, opening day of the Connecticut bow hunting season.

Sept 15th took forever to come but come it did. The set was two ladder stands a shooter stand and videographer stand 15 yards apart and 20 yards from the mock scrape. My oldest daughter was to come with me on this hunt as she was to be in the hunting stand and I was to be in the video stand. But as chance had it, she did not want to get up in the morning.  I told her I wouldn’t beg her to come she had to want to come.  She decided to sleep. Oh well, I would hunt the hunting stand this morning then.

The stands were downwind from a transition trail that lead from a river bottom area that the bucks would use at first light to cross and get back into the sanctuary of the 100 acre woods. They would cross the river get back onto the property and head up the hill along this transition trail to the bedding area 400 yards ahead in a thick matted area of mountain laurel, blowdowns and overgrown heavy brush.

Being on the downwind side of the transition trail was perfect positioning for a morning hunt.

I had gotten to the hunting property about an hour before daylight.  I dressed into my Mossy oak tree stand pattern, and my leggings that were scent free with strap on plastic booties that were also sprayed down with scent a way spray.  I was totally scent free showering earlier with Hunter’s specialties scent free soap “the green soap”.

I was ready.  I had my Hoyt Defiant fast flight all tuned and ready. Using Easton axis arrows or Easton ACC arrows I don’t quite remember now. Slick tricks were my BH of choice. A devastating four blade broad head that had previously killed many a buck for me. I walked into the stand set.  But before I got there about 100 yards from the stand I started to notice a scrape on the trail.  Then about 20 yards another one, then another 20 yards and another one!! I couldn’t believe my eyes as I was walking in on a big buck that had set up a scrape line right on my trail!!! I knew that the biggest bucks in the area tend to make the earliest rutting sign so to say I was excited was a true understatement.

I got into the stand while it was still dark.  Silently climbed into my 12 foot high ladder stand. I hung up my bow, strapped in and sat waiting. It was about 58 degrees cool but very comfortable for a September early morning.

As the light slowly broke I could start to see the ground and the area around me.  I looked to my right along the trail and I could see another scrape down the hill maybe 30 yards from my stand.  I was really anticipating something good was about to happen.

At just about 7:00am I had not yet seen a deer.  But I then heard some leaves rustle and then I looked in that direction just below me on the trail about 25 yards down the trail. There he was!! A very nice eight point buck, I could see long tines, it looked like his main beams were touching.  I said to myself that is the big buck I had seen on several scouting trips to the open fields earlier that summer on this property.  He was the biggest buck using this property.  My heart starting to beat faster.

He began raking a small bush and he was tearing it up with his antlers.  Man he was making a racket. I could see where he was going to come along the trail. My only problem was I didn’t see him until he was really too close. Being downhill from me he would look up the hill and would more than likely spot any extra movement on my part. I decided that I would shoot him if the opportunity presented itself from the seated position.  He turned after destroying that bush and started walking right up the scrape trail. His movement along the trail would take him right past my stand upwind of me about 18 yards. I thought this is perfect.

He continued along the trail, and as he went behind a standing cedar I drew my bow. The bow came back smoothly and my hundreds of practice arrows had gotten me ready for just a moment like this. He stepped out from behind the cedar, still on the trail, and continued to walk. I got my lime green pin right on his front shoulder and used my mouth to make a little neeeeet sound.  He stopped dead in this tracks completely broadside at 18 yards, just turning his head to the left in my direction to see the origin of that bleat.  I settled my lime green fiber optic pin just behind the shoulder half way up his body and squeezed the trigger slowly on my caliper release aid. The bow went off!!

I look back on that hunt now and know that all the preparation and the hard work, the practicing, the scouting, the setups and tree stand hanging, and everything else we do as bow hunters to prepare ourselves is all worth it when we have that successful half a minute of adrenaline course through our veins. “Live life at full draw” one of my fav t-shirts says on the back. Boy is it so true!! Bow hunting it’s the best!

The arrow hit its mark perfectly.  This ole boy didn’t jump the string and the hit was perfect right in the boiler room. He immediately bounded to his right away from me and was gone is seconds.  Out of my sight, but where. Oh now the wait. From the highest of high adrenaline rushes at full draw to the wait of the recovery.  How many thoughts go through your mind? Did I make a good shot? Did the arrow hit him right? Where is my arrow, I can’t see it?  Is he down?

A half an hour, seemingly ten hours went by, and I got down out of my stand.  I don’t use lighted nocks because I feel it makes you have a tendency to come off the shot looking for your arrow. So I don’t use them.  So when I get down I don’t immediately see my arrow.   I walked toward where he was last standing, just past the cedar.  There was my arrow stuck into the ground.  A full froth of blood stain arrow complete with bubbles was on the full length of the shaft of the arrow.  Oh Yeeha!! Lung blood!

I started to walk in the direction where he ran.  No blood?  Then about ten yards there it was a great slick trick blood trail pouring out all over the ground and on the side ferns and saplings along the path he ran.  It was a great blood trail one that I could follow at a pure walking pace. I walked up over a knoll where he ran about 20 yards from the cedar trail.  As I crested the knoll I looked out onto the flat. I looked and looked along the blood trail I could see out away from where I was presently standing. As I looked along that blood trail I looked not thirty yards away white belly!!!! There he was piled up not 50 yards from where I shot him.  It was a very good buck for my little woodlot in Connecticut.  Long main beams that almost touched, nice tine length, a main frame eight with two stickers making him a ten point. Boy was I thrilled.

I scored him and he scored 132” I was so excited.  After the required drying period I had an official scorer score the “scrape line” buck.  He netted exactly with deductions, for two little stickers off of his G2’s exactly 130 and 0/8. He was my first Pope and Young Buck!!

I had gone back to my mock scrape and found that it had grown three times its original size.  This buck had taken this mock scrape on as his own and made a defined scrape line that became his names sake.

I took the scrape line buck on opening day that September morning. My brother was hunting with me and I called my family and my daughters came to see this nice buck dad had taken. I had taken a wonderful buck, had family to share it with and I have him mounted for all my memories to share with friends and family that come to my home and walk into my den.  But to me that “scrape line” buck has forever etched his memory into my mind’s eye. I can remember it like it was yesterday.

quick reference guide to get your field points and broadheads to hit together.